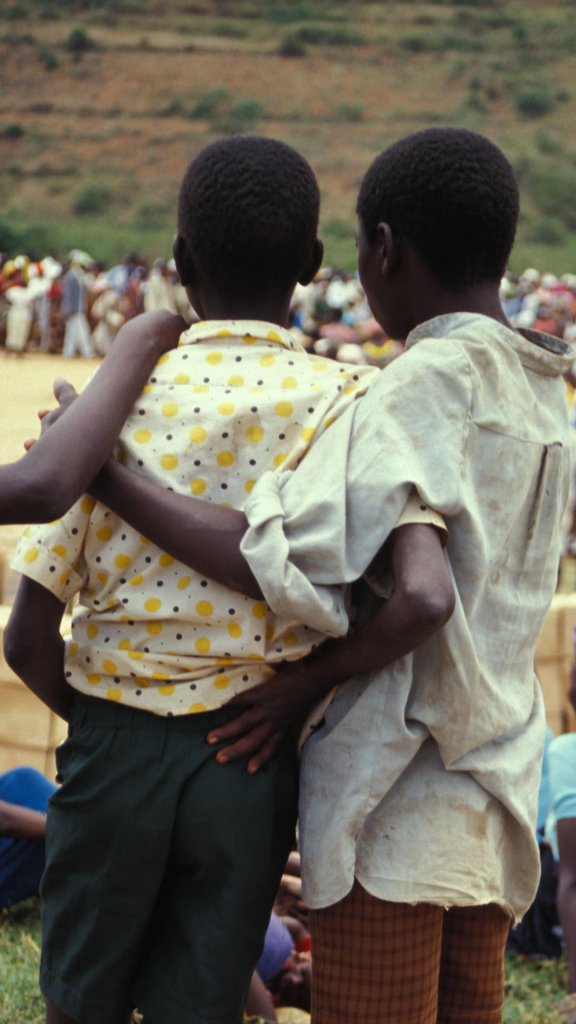 Alfredo Jaar looks at situations of humanitarian urgency, political oppression, and social marginalization, where human and civil rights are violated. He especially focuses on situations that our mind tends to sweep under the carpet, and on the rhetoric through which the media manipulate and convey information, instead giving a voice to the victims of those abuses.

In the video Embrace two young men of color embrace, suggesting the idea of friendship, support, but also of a strong sense of unease before what they are observing that we cannot see. We can, however, deduce from their body language that it is something they find disconcerting.

The work is part of The Rwanda Project (1994-2000), a series of twenty-one works on the Rwandan genocide in 1994, in which the artist chooses to evoke, without demonstrating it, the stories of pain linked this tragic event, not to add other images of violence but rather to open up a space for the imagination of the viewer who is called upon to contemplate and complete the image.

Alfredo Jaar is an artist, architect, and filmmaker who lives and works in New York. He has participated in the Biennales of Venice (1986, 2007, 2009, 2013), São Paulo (1987, 1989, 2010), as well as Documenta in Kassel (1987, 2002). His numerous solo shows include those at the New Museum of Contemporary Art, New York; Whitechapel, London; The Museum of Contemporary Art, Chicago; The Moderna Museet, Stockholm. Jaar has realized more than seventy public interventions around the world. Over sixty monographic publications have been published about his work. His work can be found in the most important international collections and museums, such as The Solomon R. Guggenheim Museum, New York; TATE, London; Centre Georges Pompidou, Paris; Centro Reina Sofia, Madrid. A Guggenheim and a MacArthur Fellow, Alfredo Jaar received the Hiroshima Art Prize in 2018, and the Hasselblad Award in 2020.