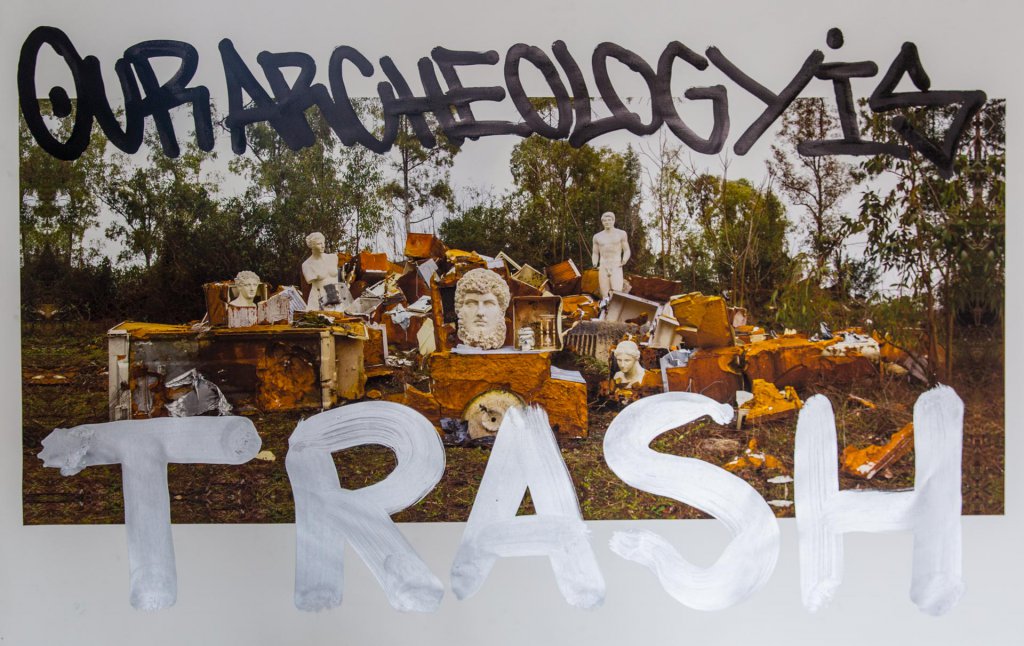 Archeology I, Tivoli Italia, 2019, from the series Paintings

For many years, Anne de Carbuccia has traveled to the most far-flung places on Earth to document sites, animals, and cultures that risk becoming extinct, as well as to monitor the evolution of the planet and the impact of human intervention on the environment.

The series Paintings derives from another series of works entitled TimeShrine, made up of the photographs of different places in the world to which the artist added two extraneous elements, an hourglass and a skull, set down on whatever material is available, thus outlining a sort of shrine of time (known as TimeShrine) in order to capture the evanescent beauty of our planet.

In the series Paintings, the photographic works of TimeShrine are combined with the writing of graffiti, following the global graffiti project launched by the artist, carried out with a group of graffiti artists and based on the creation of mural paintings in the city declaring the climate crisis. The works that were the result of the project bear witness to the self-destruction of an entire planet, from which humans cannot be exempt as they are an integral part of the system.

Anne de Carbuccia is a French American artist and filmmaker who travels to the world’s most remote locations to document through her art endangered environments, species, and cultures. Her images have been exhibited in museums and public institutions throughout Europe and the United States. Her debut short film, One Ocean, was presented at the 75th Venice International Film Festival and is available in free streaming at One Ocean. Anne has established the Time Shrine Foundation in the USA and the One Planet One Future Association in Italy to raise awareness on climate breakdown and human-caused threats to the planet. She is currently working on a feature documentary on the challenges of the “Anthropocene” that will be released in 2021. She compensates her carbon footprint with MyClimate.