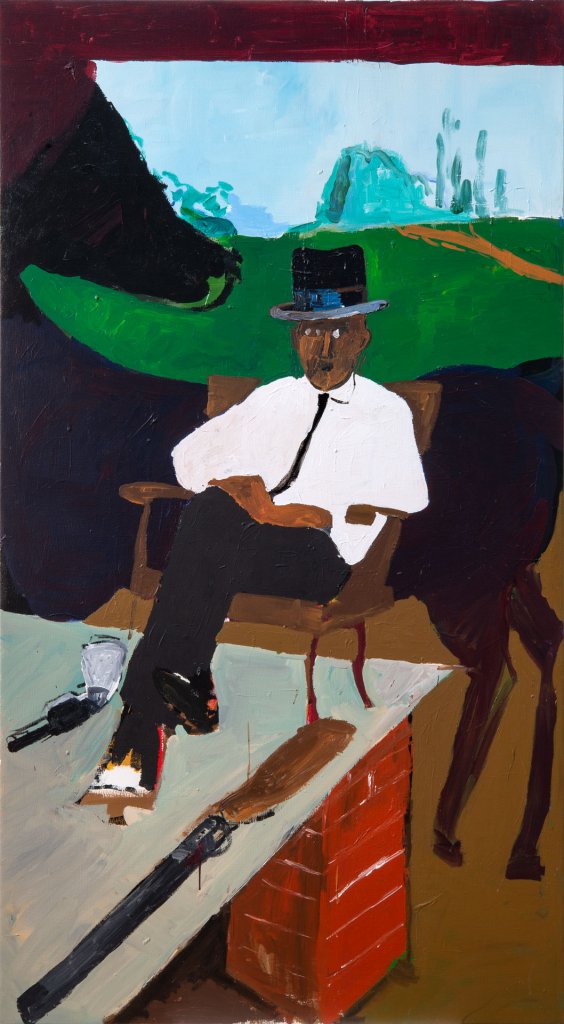 Henry Taylor is famous for his portraits in which he describes the history and the condition of the African American population in the United States.

In particular, Ardmore Taylor aka “Mo” portrays the artist’s grandfather, Ardmore Taylor, nicknamed Mo, with a tie, hat, cowboy boots and his black horse behind him (he was, in fact, a horse trainer in Texas). He keeps close-by a gun and a rifle, alluding to both his lifestyle and his death:  shot and killed by a firearm in 1933 at the age of 33 years because, the artist tells us on the back of the canvas, he refused to pick cotton. He was shot in the arm by some white men who wanted to steal his horses. After his mother (the artist’s great-grandmother) medicated and dressed the wound, he got back on his horse to look for those white men. He was ambushed and killed in a poorly lit street in Texas. His horse tried to use its face to lift his body, his mother along with his son (the artist’s father), aged 9 or 10 at the time, carried the body home.

Henry Taylor lives and works in Los Angeles. Taylor’s work has been the subject of numerous exhibitions in the United States and internationally, and it is in prominent public collections including the Bourse de Commerce – Pinault Collection, Paris; Carnegie Museum of Art, Pittsburgh; Fondation Louis Vuitton, Paris; Hammer Museum, Los Angeles; Metropolitan Museum of Art, New York; San Francisco Museum of Modern Art, San Francisco; Whitney Museum of American Art, New York. Taylor’s work was presented at the Whitney Biennial at the Whitney Museum of American Art, New York in 2017 and the 58th Venice Biennale in 2019. In 2018, Taylor was the recipient of The Robert De Niro Sr. Prize in 2018 for his outstanding achievements in painting, and the Museum of Contemporary Art in Los Angeles is preparing a major survey exhibition for 2022.