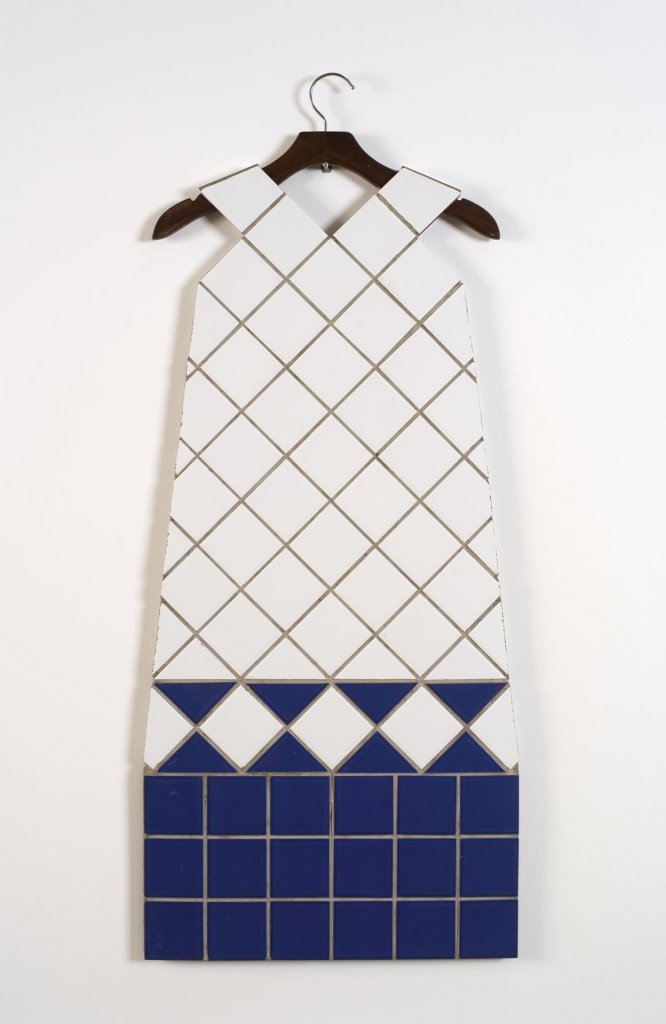 Rethinking the past of every community, retrieving, reusing, redistributing, are the bywords of Zhanna Kadyrova’s research. Made inBrazil Series #6 is part of a broader project, entitled Second Hand (2014-ongoing), of which an edition was exhibited at the 2019 Venice Biennale.

This project began just before the Ukraine introduced so-called ‘de-communication,’ a process that aims to cancel every trace of the country’s Soviet past. In the late 1950s, enamel tiles, enamel being a material used in the mosaics of the Byzantine basilicas and after that in orthodox churches, were introduced in Soviet territories where they clad the facades in gray concrete, a symbol of modernity. By metaphorically associating the act of reimagining a building with that of reusing garments, Zhanna Kadyrova uses the tiles of destroyed buildings, matching them with heavy construction materials like concrete and cement, to make sculpture-garments, convinced of the need to remember and reimagine the architectural traditions of every community. In particular, Made in Brazil Series #6 was created in São Paulo in 2014 with second-hand tiles used in Brazil to clad the walls of shops, cafés, and local buildings.

Zhanna Kadyrova lives and works in Kyiv, Ukraine. Her art includes photography, video, sculpture, performance and installation. She often develops site-specific projects. Kadyrova’s works are a critical reflection on the post-Soviet era. The material she chooses to work with is considered by her a witness to global transformations of the twentieth century – cement, ceramics, resin, metal. These materials are coming from a construction vocabulary, and are literally building the foundations of our complex society today. Her work was exhibited on the occasion of solo and group shows, as well as the following biennials: Moscow Biennale of Contemporary Art (2007, 2013), Venice Biennale (2013, 2015, 2019), Kyiv Biennial (2015, 2016, 2017).