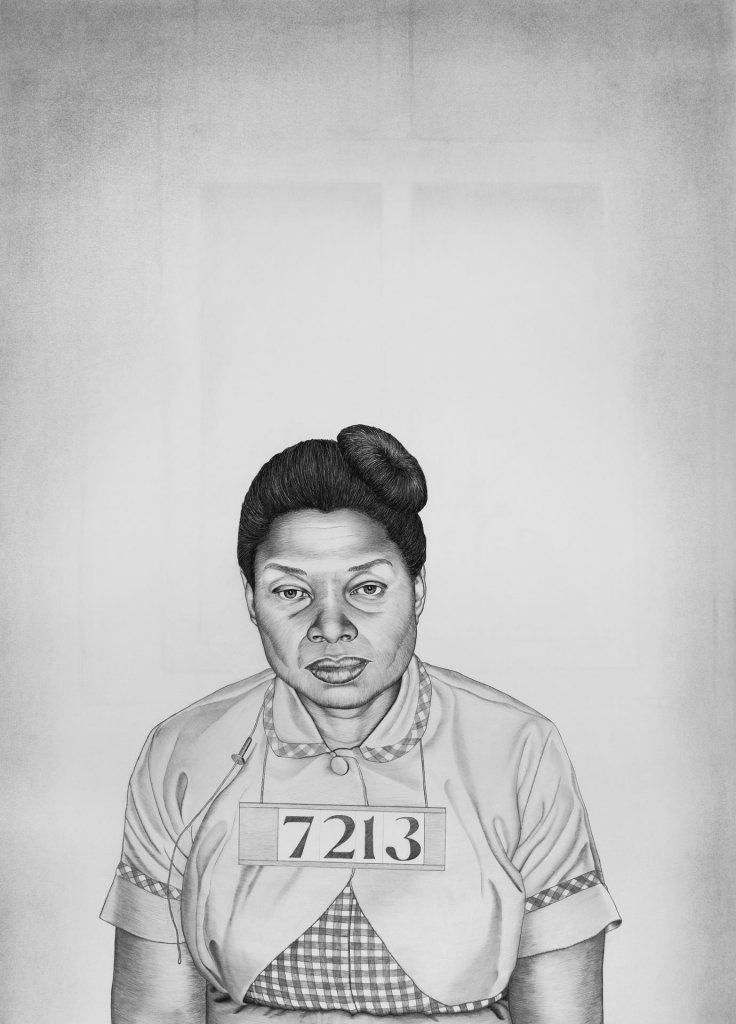 Lava Thomas deals with racial and gender issues by drawing from the African roots of her family and the socio-political events of the past and the present.

The series of drawings Mugshot Portraits: Women of the Montgomery Bus Boycott offers a contemporary gaze at the important legacy of the activism of women of color against the social injustices that were taking place in the United States against African Americans. In the 1950s the buses in Montgomery, Alabama, had three separate sections: one for whites, one for African Americans, and one for both. But if an African American was sitting in one of the common seats, and a white person got on the bus and couldn’t find a seat in their section, the African American had to give up his or her seat. The protest known as the Montgomery Bus Boycott began in 1955 in Montgomery when Rosa Parks refused to give up her seat on the bus to a white person, and many other women followed her example. Lava Thomas’s Mugshot Portraits are portraits based on the mugshots of the women who were charged with Alabama’s anti-boycott laws. While the original photographs aimed to criminalize those women, Mugshot Portraits celebrate their crucial work.

Lava Thomas is a 2019-2021 recipient of the Lucas Artists Fellowship Award at the Montalvo Arts Center and has participated in artist residencies at Facebook Los Angeles (2020), Headlands Center for the Arts (2018) and the Djerassi Resident Artist Program. She is a recipient of the 2020 Artadia Award and a 2015 Joan Mitchell Grant for Painters and Sculptors. Thomas’ work has been exhibited in institutions including the Smithsonian American Art Museum, Washington; the Contemporary Jewish Museum, San Francisco; and the California African American Museum, Los Angeles. Her work is held in the permanent collections of the San Francisco Museum of Modern Art, San Francisco; the Smithsonian American Art Museum, Washington; the Studio Museum in Harlem, New York; the Pennsylvania Academy of Fine Arts, Philadelphia; the Berkeley Art Museum & Pacific Film Archive in Berkeley.