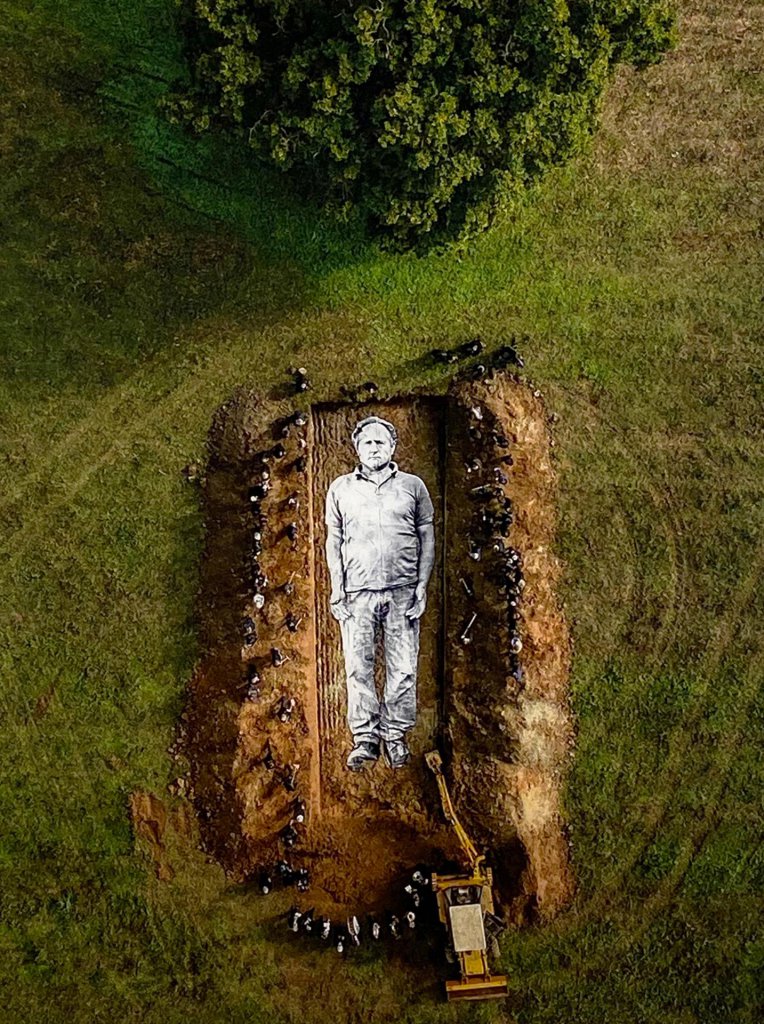 Famous for his photographic portraits of everyday people, printed and glued to the walls of numerous cities around the world, JR reinterprets the identity of contemporary cities as he wonders about their nature and identity.

Omelia Contadina, Dario Sforza, Sepoltura, Castel Giorgio, Italie, 2019 comes from Omelia Contadina, a short film made by JR together with the filmmaker Alice Rohrwacher. Premiering among the Proiezioni Speciali (Special Projections) of the 77th International Film Festival in Venice (2020), it seeks to prevent the disappearance of peasant civilization (in particular, that of the Alfina highlands between Lazio and Tuscany, violated by the intensive monocropping and the hosts of insects that such systems product), staging its ‘funeral.’ At the same time, however, it is an ode to hope devoted to all those who keep humanity alive by producing food. JR produces huge prints corresponding to the portraits of the farmers who day in, day out fight to defend their crops and their territories. Through a collective rite, he places those portraits in the fields the same way the deceased are welcomed by cemeteries, and seeds are planted in the ground to generate a new life.

JR’s artistic career began in 2001 when he found a camera in the Parisian subway. His important projects are Portrait of a Generation (2006), Face 2 Face (2007), Women Are Heroes (2008), Inside Out (2013). In 2011, he won the TED Prize for his work done worldwide. His recent projects include a collaboration with New York City Ballet, an Academy Award Nominated feature documentary Visages Villages co-directed with Nouvelle Vague legend Agnès Varda, a huge installation in the Pantheon in Paris, a monumental mural à la Diego Rivera in the suburbs of Paris, in San Francisco, in New York, and a gigantic installation at the US-Mexico border fence. In 2019 JR had solo shows at SFMOMA, San Francisco, and Brooklyn Museum, New York.