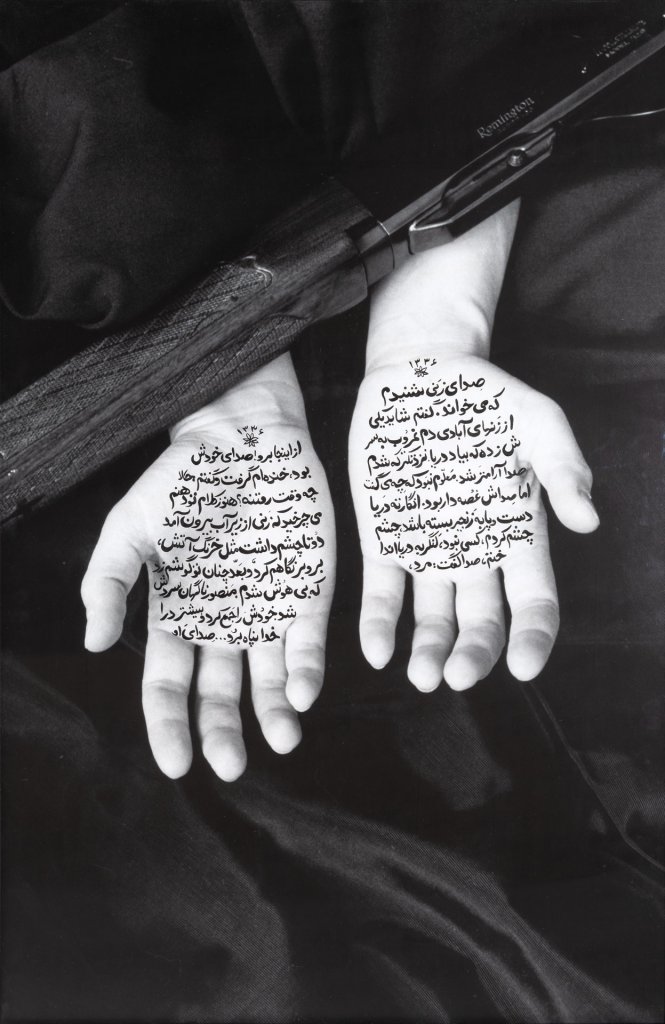 Shirin Neshat analyzes the female dimension in contemporary Islamic society, in particular the Iranian one that she herself hails from.

Women of Allah is a photographic series made between 1993 and 1997, through which the artist explores the complexity of the female dimension in Iran after the Islamic Revolution in 1978-79. Neshat was already living in the United States when the revolution broke out. She could not return to Iran until 1990, and was shocked to see the transformation of her country with respect to what it had been like during her adolescent years. In Women of Allah the artist portrays veiled Iranian women who are often depicted while holding firearms. She thus expresses the figure of the woman in all her complexity and ambiguity, caught up in the duality of roles that Post-Revolutionary Iranian society assigns her: on the one hand, subjected to the restrictions imposed by strict religious rules (the compulsory wearing of the chador), and, on the other, the opposite condition, which wants her to be responsible, a participant, and a warrior (see the presence of firearms). The few parts of skin left uncovered by the chador are covered in passage from texts in Farsi, whose contents vary from religious to secular subjects, exploring the spheres of intimacy, sexuality, and feminism.

Shirin Neshat is an Iranian-born artist and filmmaker living in New York. Neshat has held numerous solo exhibitions at galleries and museums worldwide, including the Hirshhorn Museum and Sculpture Garden, Washington DC; Detroit Institute of the Arts, Detroit; the Serpentine Gallery, London. A major retrospective of her work, was recently held at The Broad Museum, Los Angeles and at The Modern Art Museum of Fort Worth. Neshat has been the recipient of the Golden Lion Award at the 48th Venice Biennial (1999), The Davos World Economic Forum’s Crystal Award (2014), and the Praemium Imperiale (2017). Neshat has directed two feature-length films, Women Without Men (2009), which received the Silver Lion Award for Best Director at the 66th Venice International Film Festival, and Looking For Oum Kulthum (2017). In 2017, Neshat also directed her first opera, AIDA at the Salzburg Music Festival, in Austria.