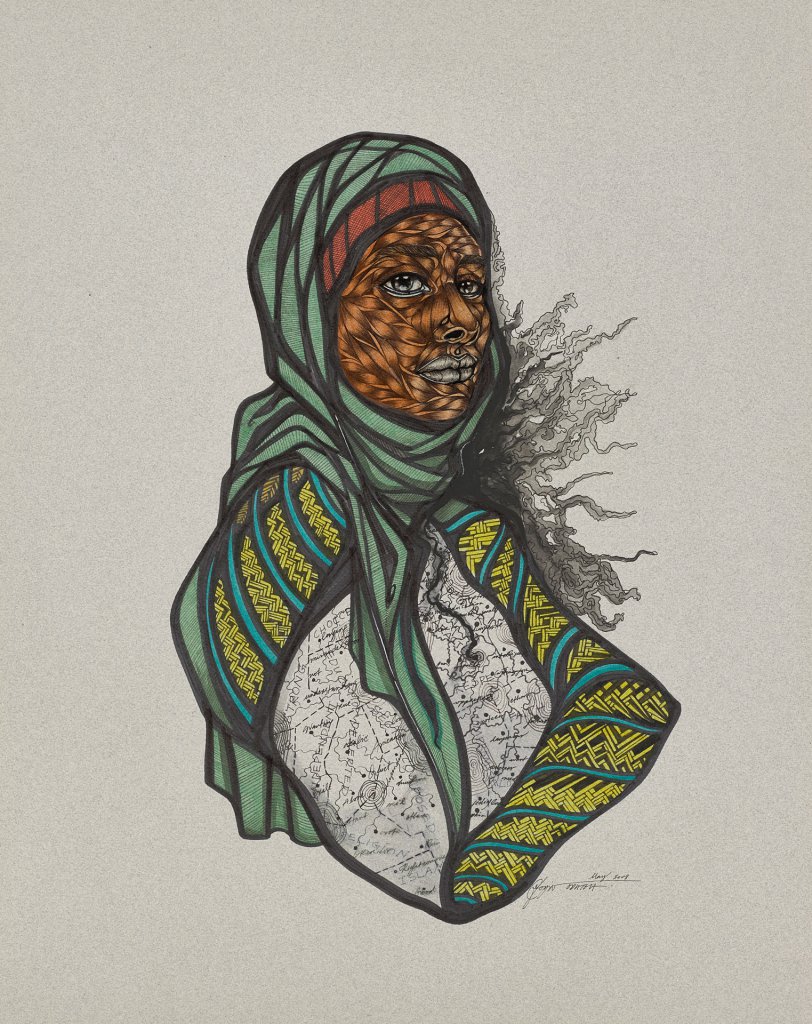 The work is part of detailed pen portraits that Toyin Ojih Odutola made in the early 2000s by merging different subjects, underscoring issues such as the differences in race, identity, and class.

Among these portraits The Original (Binary State) represents a Muslim woman of Nigerian origin. A geographic map constitutes part of her body: the places indicated there are imaginary and are called “respect,” “choice,” “independent,” “strong,” “pain,” “exotic,” “understanding.” They refer to the experience and the states of mind that the artist had as a young woman who had emigrated from Nigeria and who grew up in the conservative-leaning area of Huntsville, the county seat of Madison County, Alabama.

Through the artistic genre of the portrait, Toyin Ojih Odutola also deals with themes such as socio-economic inequality, the legacy of colonialism, gender issues, the experiences of migration, and the social conditions of people of color.

Toyin Ojih Odutola earned her BA from the University of Alabama in Huntsville and her MFA from California College of the Arts in San Francisco. At the 2020 Apollo Awards, she was named “Artist of the Year.” She has participated in exhibitions at The Drawing Center, Brooklyn Museum, The Studio Museum in Harlem, Contemporary Jewish Museum, Institute of Contemporary Art in Boston, The Flag Art Foundation, The Renaissance Society, Seattle Museum of Art, Museu de Arte de São Paulo, the Menil Collection, as well as the Manifesta 12 in Palermo. Public collections of her artworks are held at the Museum of Modern Art, New York; Metropolitan Museum of Art, New York; National Portrait Gallery, London; Whitney Museum of American Art, New York; The Art Institute of Chicago; and the Smithsonian National Museum of African Art, Washington DC.